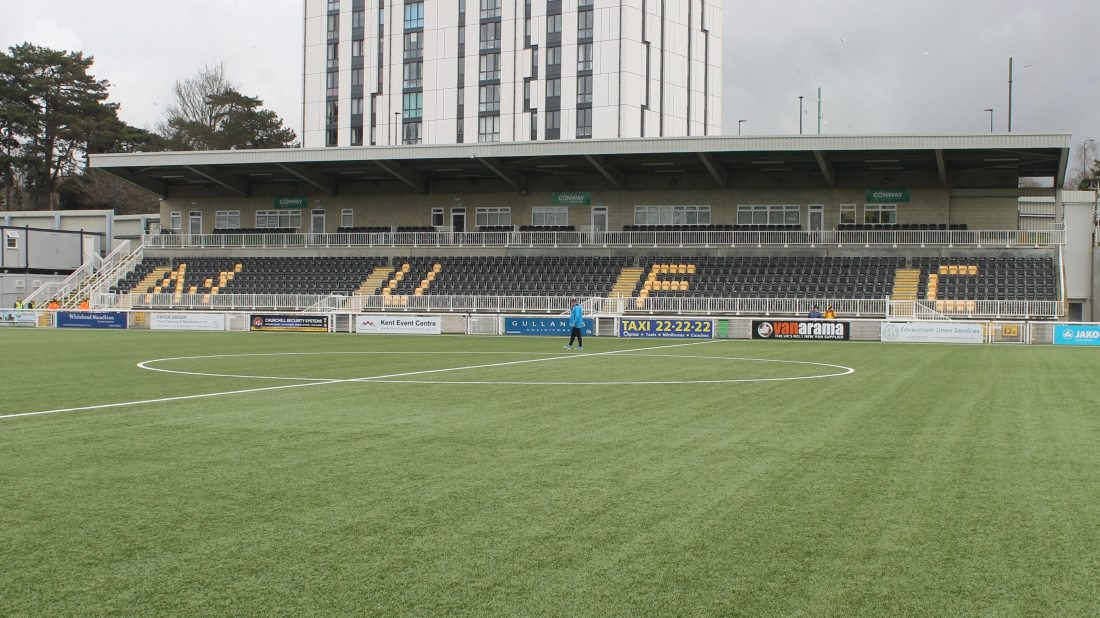 Maidstone Utd, a club with a non-league pedigree but once a Football League club in a different guise. Not alone in becoming a re-formed club, the Stones have without a doubt had one of the hardest returns to National League level.
1989 was the year Kent finally had a second Football League club, GM Vauxhall Conference Champions under the guidance of John Still, Maidstone Utd hit the big time. Within 3 years the dream had turned into a nightmare and Utd were gone, banished to the history books as the last side to start a season but not complete it, although the first game at Scunthorpe that season never actually took place. Unlike Chester, Halifax and Hereford who were placed mid way in the pyramid upon their re-birth, the Stones were plunged down to the very bottom division of the Kent County League, park football, roped off pitches, a long way from Football League stadiums.
Having spent time encamped in Dartford for their final Conference season and their entire Football League career, the club reformation was born as Maidstone Utd Invicta on a former training ground behind their old London Road ground. Progression was quick through the divisions, but promotion to the Kent League moved the club away from Maidstone once again and a familiar feeling of deja-vu could be felt. However, this time the club survived lodging at Sittingbourne and Ashford, whilst moving through the Ryman League with one relegation a minor set-back.
In March 2011 came the stability the Stones have today. Jay Saunders, club captain at the time, was appointed first caretaker manager, then permanently by Oliver Ash and Terry Casey, themselves not long settled into the Maidstone boardroom. Since those days, Maidstone Utd have seen themselves thrust towards the Football League for the first time in nearly three decades after successive promotions under Saunders. It has also coincided with the club’s return to Maidstone to a superb facility, the Gallagher Stadium just outside the town, but currently there is one obstacle barring their return to the promised land, their 3G pitch.
Despite the revenue it generates for the club and the use the community gain from it, the club are currently barred from entering League Two with a 3G surface and would be expected to rip it up and replace with a grass surface or face a double demotion as it currently stands, the cost being beyond clubs at a higher level let alone the National League for what is being asked of them.
With play offs places now increased down to 7th spot, there is every chance the Stones could fill one of those spaces as could fellow 3G users Bromley and Sutton Utd, but at what cost? Having been to the very bottom of the pile nearly 30 years ago and now nearly back from where they disappeared from, Maidstone would feel very hard done by if something as simple as a playing surface good enough for World Cup Qualifiers and Champions League matches to be played on, stands in the way of natural progress.
Having finished a respectable 14th last season after finding some good form in the latter third of the season, the Stones have moved to daytime training, which although it has seen some of the players who gained the club the successive promotions move on, it attracts those who can’t gain a Football League contract, a better class of players good enough to propel Maidstone towards the play offs and beyond.
Established players at this level such as Stuart Lewis, Jai Reason and Delano Sam-Yorke have been enticed to the Gallagher Stadium whilst the signing of striker Zavon Hines will mean goals and quite possibly the difference between the play offs and 14th again, keeper Lee Worgan is one of very few survivors of those not so distant promotion years, the nature of player movement in the game these days.
Can they make the Football League dream a reality once again? Much depends on the 3G issue rather than results on the pitch, for while this year might not be the one, next season will bring the same question, to which there is currently no answer.