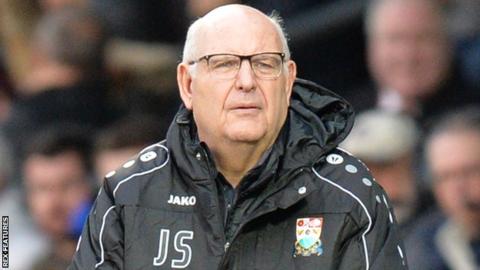 This week when John Still announced his retirement from football management it marked the end of one of the biggest era’s in the game. 42 years as a football manager was brought to an end at a time when his Barnet side were in the middle of an up and down season and at a time I wasn’t expecting such an announcement being mid season.

I first encountered John Still back in 1986, appointed first team manager at Maidstone Utd in the then named GM Vauxhall Conference part way through that season and following their move to Dartford after selling their London Road ground, he was tasked with getting the Stones into the Football League with a sizeable budget, something he achieved at the first time of asking. But upon gaining promotion he decided against giving up a good full time job outside of the game to remain in non-league, possibly a very wise decision given the Stones lasted only 3 years in the league and went through 3 managers before going bust.

He moved back into what is now the Bostik League Premier to Redbridge Forest, themselves a merger between Leytonstone & Ilford and Walthamstow Avenue. Still would go on to get them promoted to non-league’s top table followed by another merger of themselves and Dagenham to form what we know today as Dagenham & Redbridge.

Still then took a break from the non league scene and finally took the plunge into the Football League, firstly an ill-fated spell with Peterborough and then came his first spell at Barnet.

Two play-off positions in his three years was a very successful spell, built around players that played previously for him and would come to serve him well at future clubs, although the direct style of football was not to everyone’s liking. Still moved upstairs after the arrival of Tony Cottee at Underhill who presided over one of the worst ever spells in the club’s history, Still was back downstairs for a second spell in charge before the end of the season but was unable to halt Barnet’s fall back into non-league.

After leaving Barnet for a short spell at Bristol Rovers the very next season, arguably the most successful spell of Still’s long career would arrive. Back in non-league football and back in charge of the Daggers, Still went on to not just build a team to win promotion to the Football League, he kept the club in the Football League on a very small and tight budget. That wasn’t the end of the achievement as Still won the club promotion to what is now League One against huge odds given the size of the clubs they were competing with.

The spell in League One didn’t last long as the money spoke and the smaller budget saw the Daggers relegated back to League Two. Still then left for Luton having been granted permission to speak to them and once again back into non-league to try and revive a club that others had failed to do.

Still once again worked his magic and a 27 game unbeaten run saw the Hatters finally return to the Football League and gave Still a third Conference title and an unlikely to be beaten record of taking three different clubs into the League. Two seasons later though and Still was sacked, returning to Dagenham once more before the end of 2015.

His career was to end at The Hive, returning to Barnet after the much publicised financial problems at Dagenham and the resignation of Martin Allen. Brought in to stabilise the Bees after relegation, Still announced just after Christmas his retirement from management, a career that has seen and achieved so much success wherever he has been. When he first appeared in my eyes at Maidstone, I don’t think anyone could have foreseen the kind of effect this man would have on the non-league landscape, truly one of a kind, always an eye for a raw non-league gem, and many of those going on to have successful Football League careers.

The way the game is set now with managers chopping and changing so frequently, some now after less than a few months in charge, it would take a lot for Still’s record to be ever get close to being beaten, this might have been a once in a lifetime moment we’ve seen, what a ride it’s been…………………..