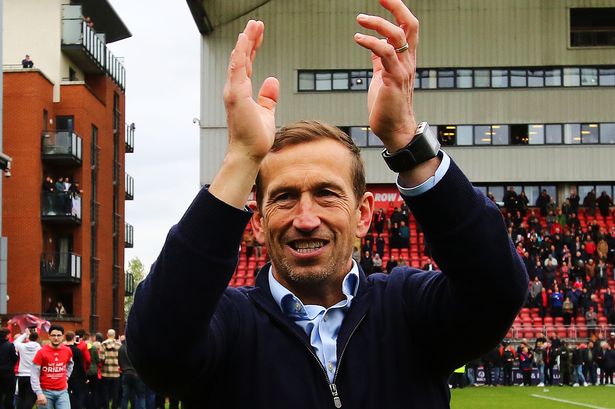 When one of the football family passes on, it unites. Rivalries don’t exist, bonds are formed and people are united in their grief, especially when it shocks to the core. Justin Edinburgh was right on the cusp of life having revitalised an East London club heading nowhere else but down.

Leyton Orient were in a mess following a spell of undignified ownership leading to their first ever relegation into non-league football and looking odds on to either disappear or complete their freefall further down the pyramid. The change in ownership soon after the season ended began Edinburgh’s association with the O’s midway through the following season and after pulling the club away from the lower reaches of the National League, he set about changing the mentality of the club, no mean feat given how fractured the club had become through no fault of the supporters.

What Edinburgh achieved in around 18 months is quite remarkable, a return to the Football League which at the time of his appointment seemed so very far away. Not only that, a trip to Wembley just a few weeks ago where they fell just short of completing the double, little was it known what was to lie ahead.

My first time coming across Edinburgh was when he signed for Tottenham, my team outside of non-league. Talented, hard working and robust, my best way of describing his way in that Spurs backline, I was there for the Wembley sending off and subsequent cup win. Being an ex-Spur, same when it comes to being an ex-Bee you follow the career afterwards and take note of achievements and also when things are not quite going in the right direction. Edinburgh has been well thought of from Fisher to Billericay, from Newport to Gillingham that is evident everywhere and in tributes paid to him across this weekend.

He had a knack of turning clubs around, not just Orient fans who stand testament to that, ask Newport County supporters as well. He wasn’t afraid to begin at the bottom and learn his trade, he worked his way up and took his chance when it came to him, last season very much a prime example of players buying into his thinking and succeeding where others have failed.

49 years old is no age to gone, I mean just 8 days ago he was in Madrid following Spurs in the Champions League Final, a well earned break what he had achieved this season. When the news broke on Monday and with no further news this week I feared the worst, I hoped it would end well, but ultimately and sadly it didn’t.

The world of football from its players and managers to it’s supporters has paid some lovely tributes since the sad news was revealed on Saturday evening, and more no doubt will follow in the coming days. All richly deserved for a man who left an impression on many and a legacy in London that will long be remembered.