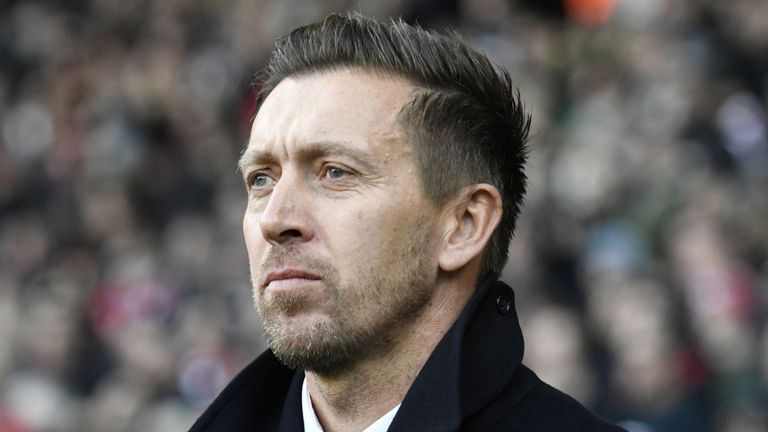 As promised this is part two of the interview with Darren:

TK: Fans love your honesty in the after match interviews, do you feel it’s what the supporters deserve rather than sugar coating around performances that haven’t been to the level you expect?

DC: Listen, football fans know what they’re watching you can’t bullshit them. So, at the end of the day I say it as I see it and people don’t have to agree with me and there’s always plenty of discussion before a game between me and Junior, he’s the most detailed football person I’ve ever had in my life, he breaks down in such fine detail and that’s how I see the game. Plenty of debates and discussion between me and Junior and we know what we want to see.

Being honest about what I’ve seen is the least everyone deserves, I’m honest with the players I’m not gonna lie to them, they know my feelings, Junior knows my feelings so I think it’s only right the fans get an insight into what I’m feeling, but a case of picking my words more carefully, yeh they deserve honesty, at least they can’t look back and deny I’ve not been truthful!

TK: Having been a former player at Underhill and obviously now here at The Hive with its great facilities, what do you think the club’s vision should be for the next 10, 15, 20 years?

DC: The set-up at The Hive and the way the chairman is looking to develop further as well, it should be looking at League One, the Championship, beyond, why not. You know, you’ve got Bournemouth and Brighton as good examples of what can happen with short term goals and long term goals side by side, we have a wonderful facility here but there has to be some structure in place, I believe some continuity and there has to be a togetherness. And if I’m straight talking with you like we just said about being honest it wasn’t the same club that I left as a player.

It was a pleasure to play at Underhill, I didn’t enjoy running up the hill in the second half mind you, and having to take just a step to take a corner underneath the clock, it was always a joy to play at Underhill because it felt like a real togetherness, a real family club.

I sense there’s some disharmony and people a little bit frustrated with how it’s gone since we’ve been at The Hive, but it goes without saying if we’re going to go forward as a club we need to be together. I know it’s easy said and difficult to put in place but we need to make it a place for everyone, the players, the fans, the staff here, a happy place whether that’s you turning up for training every day or twice a week to watch matches, the long term goals are obviously to take the club as high as possible but short term let’s get some wins on the board, make it a happier place for everyone.

TK: How difficult is it to get in the players you want when agents are trying to get maybe a better deal elsewhere?

DC: Haha, how appropriate! I think every club; every manager will tell you that’s gonna happen everywhere even at the top level. One club is going to offer 100K, the next club will offer 150K, and so it’s the same problem but on very different levels. And that’s been the case here, it’s been very difficult to get one or two players in this summer, I can promise you now I’ve tried and tried, and it’s been hard. I’ve had several players certainly been keen to play for me and Junior and the way we want to play, The Hive and the pitch and everything, plenty of plusses but people are looking for the best deals, they’ve got families to care for and it’s the same as any job you want the best you can get.

That has led to us missing out on a number of targets and I’m sure managers up and down the country can tell you the same story, it’s a case of pound notes.

TK: Can you put your finger on why the club hasn’t established itself as a League Two or League One club?

DC: I think I’ve said it already, it’s continuity. I think there’s this turnover of players and managers that has contributed to that. I looked the other day and since 2011 there might have been 23/24 managers and on occasion as many as 4 per season! And every manager then wants to bring in their one or two players and change the style.

So, smaller numbers, a tighter nit group, a little bit of that continuity and a little bit of faith in one or two when they go through a bad patch of form, that’s managers as well, I’m not trying to plant the seed that if we have a poor start, I understand the position I’m in being results based but we need to stand by the players. I believe in them, if they can be consistent it will be better for Barnet and better for themselves as individuals, they might even stand a chance of moving onto higher levels which I’m sure is a target for every one of my players.

But once in a while you have to build a nice foundation and put a structure in place, keep your squad to a happy size and again that word, continuity will serve us well.