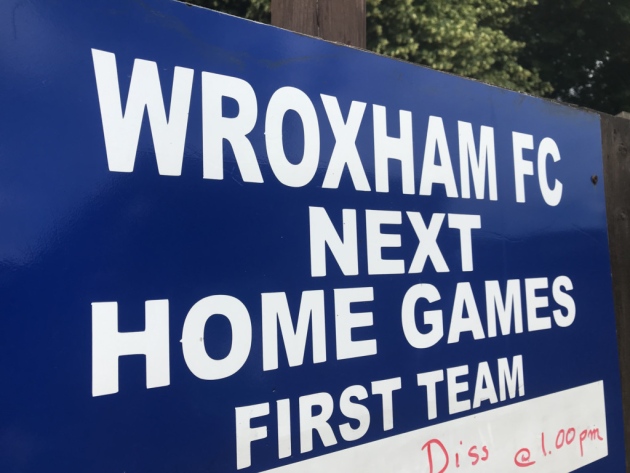 Some of you will remember if you cast your minds back to last season that Wroxham FC featured twice in my blog ramblings. And the reason for a club some four hours drive away from my home features in my thinking? Well, it was my holiday destination as a child for many years and as I grew older the odd game was taken in at Trafford Park and looking out for results saw them add to the great list you garner as life goes on.

For years they were one of the top sides in the Eastern Counties League or the Thurlow Nunn as it is known now, constantly in the top five and champions three times in a row twice in the 1990’s. In those days promotion isn’t like it is now where clubs have to take the next move up, you can’t refuse. The last title win in 2011-12 did however see the club take the leap taken into the Isthmian League and stayed there until relegation in 2016-17 after two reprieves from finishing in the relegation zone.

Being a little bit out on a limb in East Anglia despite being only eight miles from Norwich, travelling and attracting players becomes a problem when you aren’t doing so well at a higher level and the associated extra costs has made things tougher for clubs up and down the country and some end up with years of struggle after being unable to survive at this level.

Wroxham though are on the up once again. The Thurlow Nunn is a tough league to win, but after stabilising under manager Jordan Southgate, they finished in 7th place last season. The squad underwent an overhaul in the summer as is common at this level with the likes of Jordan King returning. This season, Wroxham started a week behind everyone else but they’ve been busy making up for lost time and currently sit unbeaten after five league games with league leaders Stowmarket Town the only other side yet to lose a league game, the Yachtsmen with three games in hand on Town which if all were won would see Wroxham top the table.

One of those games in hand comes on Tuesday evening and a win will push Wroxham into the top three before an FA Vase trip to Netherton Utd at the weekend, a competition well known to Yachtsmen supporters having made the final in 2010 where they came up against northern powerhouse Whitley Bay.

Wroxham have in the past attracted former Football League players back to the area to turn out for the club, notably Scott Howie, Alex Notman and Daryl Such. More recently ex Premier League star Chris Sutton was amongst their ranks and his son Ollie is now between the Trafford Park sticks.

Glancing at the teamsheet most weekends now you will see some familiar names especially if you are a Norwich City fan. Simon Lappin is a regular on the starting line up, whilst Adam Dury is now assistant to Southgate on the touchline. Standing out up front is another ex Norwich player in striker Grant Holt who combines his playing days with punditry work for BT Sport’s National League coverage.

When any ex league player drops down into non league and more the grassroots level you can only draw on his experiences and ways he has learnt from years in the professional game and apply them as best you can into part time players, it’s invaluable for any club and while Holt can not pull on a Yachtsman shirt every week those players around him will be learning and hopefully taking that into games when Holt isn’t around and keep the unbeaten run going.

My aim is still to get to Trafford Park this season, to try and tie it in with a Needham Market Womens fixture in the same weekend, it’s been a couple of years at least since my last visit to watch the Yachtsmen at Trafford Park, I’m ready for the next one……..#ahoy!