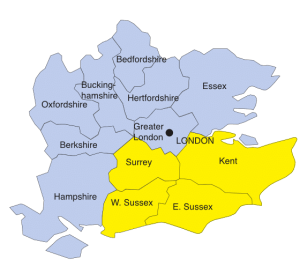 With March on the horizon at the end of this week, the business end of the season is really upon us. Eight weeks to define a season and up and down the country title races and play-off chases become more clearer. Some teams are already in control of their own destiny, be it points clear at the top or in the relegation zone but still with time to get the necessary points to get out of trouble.

Other divisions are not so clear, the BetVictor Isthmian League South East Division falls into that category where the race for promotion to the Premier Division could fall to any one of four teams although there are also a couple of other teams who can have a big say in proceedings.

Hastings Utd have been in pole position for a majority of the season but they are being matched game for game now by their Kent, Sussex and Surrey neighbours. Currently pipping them on goal difference are Ashford Utd after a fine 6-0 win at the weekend, the Nuts n’ Bolts having played one game more as it stands. Back into Sussex and Whitehawk are right in the mix to return to the Premier Division after last season relegation a mere three points further back having played the same amount of games as Ashford.

Back to Kent again and last seasons FA Vase runners-up Cray Valley PM in their first season at this level are nicely placed a further two points back on 51 for the season and like Hastings have that game in hand. As far as it goes it does look like the champions will come from one of those four clubs barring a run of results for a couple of clubs tucked in behind those in the top four.

Herne Bay currently hold the final play-off spot having also played 27 games, eight points off the top spot with eleven more to play, they can’t be discarded despite having a lot of work to do and reliance on the four above them to all suffer disasterious losses of form at the same time.

Whilst Surrey based Whyteleafe sit just outside the play-offs their one game in hand on the Bay would only draw them level with the Kent outfit and similar to them would take a massive effort to win the league, but the play-offs are very much in their sights. The team to take notice of is the one directly underneath ‘Leafe.

The FA Cup stand out team of the season Chichester City have quietly crept up the table and into contention although the table might not show that. A backlog of league games has been evident since before the months of wet weather just added to the list and with the Oaklands Park surface having suffered from constant waterlogging City have 4-5 games in hand on those above them.

The only thing that can stop them making the play-offs minimum is the amount of games to play in just nine weeks, sixteen in total and that is without any more postponements coming their way. Its possible and would cap a truly memorable season for the West Sussex club, fatigue and tiredness is likely to play a part in proceedings if it comes down to playing Saturday, Tuesday, Thursday, Saturday every week, even without the Thursday is asking a lot of part time players.

Eleven games left gives a little more room for manoeuvre but not a great deal given how tight the teams are at the top, indeed Chichester have two big games this week against Herne Bay and Ashford Utd, games that could either blow things wide open or put some big dents in City’s aspirations.

If I’m picking a winner its Hastings if they can get away from drawing too many games. Having lost just two league games all season and conceded just nineteen goals shows it’s hard to take anything in games against the East Sussex side and they must be favourites on that basis. Ashford however score goals so they can’t be discounted from the discussion whilst both Whitehawk and Cray Valley PM will both be waiting to pounce on any slip up from the top two, whatever happens it promises to be an exciting end to the season……….