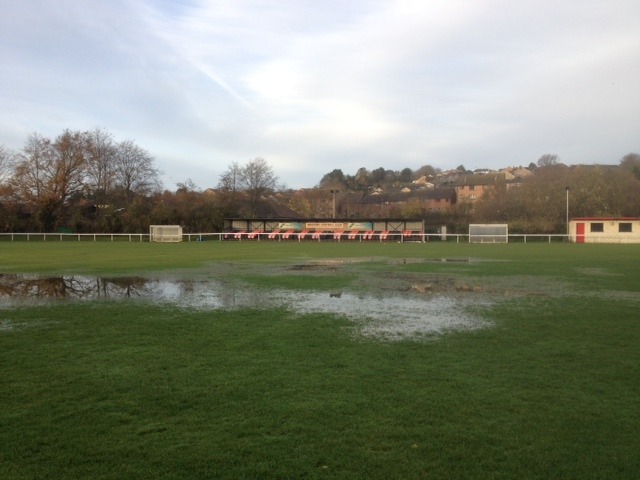 That picture above clubs up and down the country can relate to for nearly the past four months. From the National League down to park level, unless you’ve got a 3G or 4G pitch the chances are there has been more than one or two fixtures rearranged since the beginning of November!

And as we enter March with the season to be concluded by the end of April, non league are certainly going to feel like they’ve completed half a season in two months, indeed for Southern Combination Division One side Arundel that much is true unless the season is to be extended which you really can’t see the FA bending over and actually helping out their member clubs.

I agree they can’t be held accountable for the amount of rain thats fallen over the past few months, but a little extension to the season by say two weeks won’t solve the full problem but it would help out just a little bit. There are clubs that soon will be playing Saturday, Tuesday, Thursday, Saturday just to complete a season. Then there’s the argument that how many clubs will end up outside of a promotion place because their squad isn’t deep enough to cope with 4 four games every week.

It is an exceptional situation but why are the FA not stepping in to help just a little bit? The added complication of play-offs at all levels from step 5 upwards would I suspect be one of their major reasons but surely there’s no reason why they can’t be delayed for a week or two? It’s almost as if it’s a punishment for their own clubs one you can’t really understand.

What there either has to be is an investment in the grass pitches, some of which are superb playing surfaces but in need of constant investment which is not forthcoming the lower down you go, or you go down the route of 3G/4G pitches to ensure seasons complete on time. I don’t believe it needs to go for the latter unless it’s for the community option where clubs can really benefit.

Grants for pitch maintenance should be readily available to help, nothing more players like than a good natural surface to ping a ball around on. But you find as well clubs having to rent out their pitch to help the financial side of the club doesn’t help the pitch but needs must to keep the books ticking over.

Cashflow as well certainly hasn’t been helped over the past few months, indeed Tonbridge Angels at National League South level have recently made public how dire the situation has become for the Kent club with so many games postponed at their Longmead Stadium ground. Having lived near to their ground for years, I know only too well how flooded Longmead can get, and one of the questions now is do we move to 4G to protect the club and it’s future?

At County League level the situation I’m sure has had clubs scratching around to find ways and means of getting finance into the coffers to ensure they can see out the season. You would hope we don’t see these levels of postponements for another few seasons to come at least, but you can never say never with the weather………..

As the title suggests, this is a football writing blog about non-league football. I support Barnet and Tottenham Hotspur, am a writer for o-posts.com and ItsRoundAndItsWhite.co.uk and the occasional piece for Worthing FC and Langney Wanderers FC. View all posts by footballwritingblog