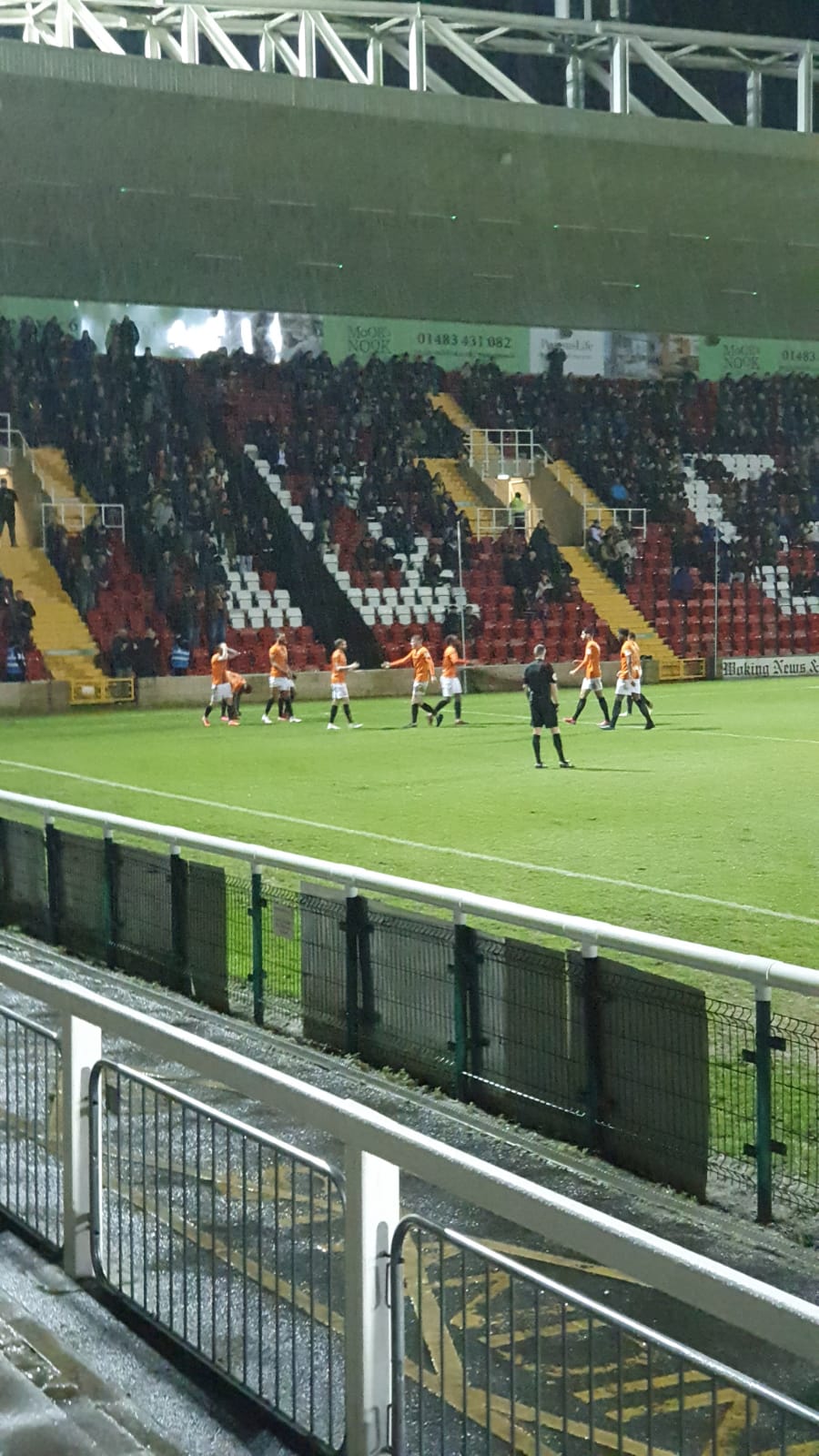 Midweek Tuesday and finally a game of football without the rain getting in the way, granted though it did rain all through the ninety minutes but it didn’t dampen anything for the visiting supporters.

It’s been a long time since I’d been to Woking, but if memory serves me right I hadn’t seen Barnet lose here and arriving here last night in fantastic form just one league defeat in their last thirteen games, but the home side have had a superb campaign so far, sitting in and around the play-off zone all season so this had all the hallmarks of being a great spectacle.

The good lush surface certainly helped Darren Currie’s side move the ball around the pitch well in contrast to The Hive, and the opening exchanges were pretty even, Woking’s outlet being ex-Bee Dave Tarpey down the right hand flank but lacking quality into the box to make a dent in the score-line although you can argue to that a Bees defender finding himself available every time to block any goal bound effect.

Barnet were to take the lead on 26 mins when who else but Paul McCallum netted yet again after an exquisite through ball from David Tutonda split the centre-halves, McCallum timing his run to perfection and although another ex-Bee Craig Ross got something on it, there was enough on the strike to end up in the back of the net.

Both sides then came close to a goal each, Scott Loach saving superbly whilst going the other way to the ball from a deflected Tarpey strike, whilst McCallum and Wes Fonguck combined to send Simeon Akinola clean through only for the offside flag to be raised. Akinola’s game was over before half time, seemingly a hamstring pull causing the Bees top scorer to cut short his evening but giving Josh Walker an opportunity to show Currie he deserves a starting place once again.

Woking certainly started the second half the brighter of the two sides but couldn’t find away past the Bees defensive rear-guard, whilst on the break Barnet broke with pace and almost added to the score line with James Dunne sending a curled effort just past the post.

The second goal did come for Barnet, Walker latching onto a poor defensive lapse from Mo Diarra, racing clear and expertly lifting the ball over Ross and into the net after 77 mins. At that moment looked like the points were comfortably heading back to Harrow, but this is Barnet! The visitors goal was finally breached four minutes from the end as Jack Cook’s touch put the ball beyond Loach to set up what looked to be a nervy finish.

But, as the Cards pushed forward for an equaliser, the Bees broke once again at pace with Walker who cut inside and curled the ball left footed past Ross for his second and Barnet’s third to ensure the points were heading home with the visitors.

Credit must go to Currie and Junior Lewis for the tactical set up with Tutonda detailed to track Tarpey and Fonguck given license to drive forward from midfield, plus the change to bring on Ephron Mason-Clark to provide a more pacier outlet ball down the right flank.

Clinical outstanding performances all over the park in black and amber, and now within one point of the play-offs with a decent goal difference building up. It’s vital though to pick up at least a point on Saturday away at Yeovil, another tough game as they all will be to the end of the season but as time has gone on you can feel the squad have gelled more and more, listened to what DC and JL have been asking of them and now we are seeing the full benefit, no doubting also the difference McCallum has made in offering us a different option up front and whilst scoring for fun himself it hasn’t blunted either Akinola nor Walker in front of goal.

I still believe this season is a free hit for DC working with so few players he has signed, but they have responded to him, they’re playing for him and just maybe we might achieve with them……..