This was a blog that came as a suggestion and me being me of course had a Twitter contact only too happy to help. Step forward Ally Maloney, physio at Isthmian Premier Division side Cray Wanderers and providing me with a wonderful insight into how a full time day job can have football fitted around it.

So sit down, grab a drink and have a read of what it’s like to be a physio and what it takes to be one…………….

TK: Was physiotherapy something you always wanted to get into?

AM: When I was really young, I wanted to be an archaeologist (I was heavily influenced by Indiana Jones) but at 15 years old I decided physiotherapy was a better option, my only regret was I don’t get a cool hat!

TK: How much studying went into getting your qualifications?

AM: It was a lot of studying in fairness. Without the A-level based work it was a 3 year degree with clinical placements in hospitals. It’s 5 days a week and a lot of studying around anatomy, injury, psychology and exercise prescription amongst other things, I really got my money’s worth on that student loan!

It’s a hard degree but it gets you ready for a career where you never stop learning. I think I’ve studied more since leaving university than when I was there!

TK: Where did the job take you first?

AM: Football wise I started at Greenwich Borough about 10-11 years ago. My mentor Alex sent me down to a training session and the rest, as they say, is history. I spent a few seasons there with the team in the Kent League.

TK: And how did you find from a female perspective being involved in men’s football? What obstacles if any did you encounter?

AM: It’s going to be a cliché, but I’ve never really paid it a huge amount of thought. There’s always going to be a bit of banter flying around about it. 99.9% of the time it’s good hearted and I try to roll with that. If I was too sensitive, then physiotherapy in general isn’t a great career choice.

Don’t get me wrong, there are definitely a few ‘dinosaurs’ still out there but I’m lucky that I haven’t had to work closely with anyone like that, to be honest I wouldn’t work with anyone still holding those views.

I used to hit a few obstacles when I first started, it was hard to break into football and then I had to work hard to prove I could work with men. In non-league terms, it’s never held me back, any comments just made me more determined and you learn to be a bit more thick-skinned. Nowadays its really common to see female therapists at clubs so I’m not that special anymore haha! 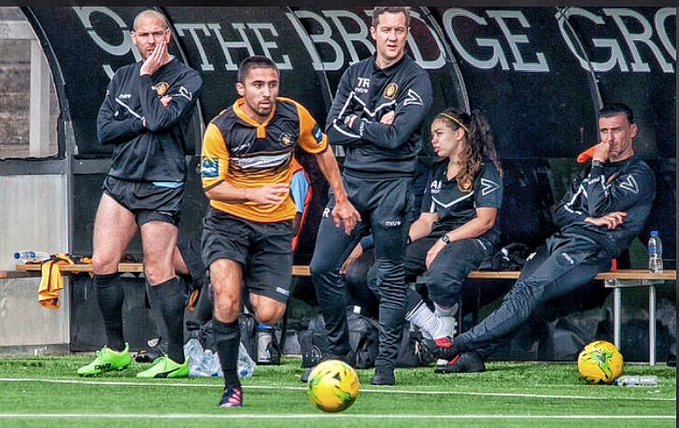 TK: Indeed you’re not! It’s great to see so many female physios up and down the country. How long have u been at Cray Wanderers and how did you end up at Hayes Lane?

AM: I’ve been with Cray about five seasons now, I had joined VCD Athletic with Tony Russell (the current Cray first team manager) and won the league with them. He got the opportunity to go to Cray and took his team, including me, with him. He’s a great manager to work for so I jumped at the chance to tag along. In hindsight, it’s been a great decision as Cray are one of the best clubs out there. It’s not an amazingly exciting story.

TK: It doesn’t have to be, but it’s your story and everyone has one. So, talk me through a normal week as Cray Wanderers physio.

AM: A normal week would involve twice a week training on Mondays and Wednesdays, they involve a bit of injury assessment from any matches we’ve played to basically establish who is and isn’t going to be available for the forthcoming matches. It’ll also involve a fair amount of rehab and injury prevention work to keep the players individually in good condition.

Cray also have yoga sessions which are led by an instructor to help with the conditioning for the players benefit. I also like to watch training taking place when I get a chance as you can see more functionality with football based activity, and you get to understand the management team’s game plan and also the individual way each players moves.

Then at the weekend, I have a full day on matchdays. I get to the ground as early as I can to set up and complete any fitness tests/pre-match rubs and any treatment that’s required. Then I check my bag is ready (make sure there is a pack of Haribo in there or I’ll get a lot of sulking all around me) and its game time!

It wouldn’t be a football week however without my weekly story from our 86 year old goalkeeping coach Bill Lappage plus the dad jokes from the management team!

TK: 86! That’s fantastic to see someone of that age so involved on matchdays.

AM: He’s amazing, honestly one of my favourite people in football and probably in general as well.

TK: How does the football fit around the day job? (And what is the day job)

AM: By day I am an NHS physio, I work in the specialist rehabilitation unit from Monday – Friday. Luckily, I don’t work on call or weekends anymore, so it doesn’t impact on my football work too much. There are times when it can be a hard graft to fit them in together, especially when a Guernsey away midweek trip comes up! It’s a chore of love, my annual leave is often booked up in August as soon as those fixtures come out!

But there is an important balance to be maintained but honestly, I don’t think there are many people in non-league who have similar stories of commitment, but I do see that at Cray.

TK: Of course I have to touch on the current situation at the moment, have you or the club managed to do anything for the players such as fitness plans prior to the announcement to null and void the season?

AM: It’s still a massively unreal situation isn’t it, we had a couple of training sessions prior to the restrictions setting in. But then it became clear the league couldn’t continue which is sad but very necessary.

A few players have their individual work, a great opportunity to sort out those niggling little injuries. I sense as a club we will wait for the outcome of when football can start again, I hope it will be sooner rather than later.

TK: I’m hoping for the same but all we can do is wait. Is there a personal ambition to move higher up the football ladder or does mixing full time work with the football side work better for you?

AM: I would be lying about my ambition that I wouldn’t jump at a chance to give a higher level a try. I think I may have missed the boat on working in professional football now (I’m getting on a bit now and can’t see myself abandoning my non-league roots).

I really love my NHS work and I hold great value in what I do, and non-league gives me the opportunity to keep up that work alongside my passion in football. It’s a good balance and in terms of happiness I couldn’t be much better with my current set up.

TK: One last question, what one thing would you change about non-league football if you could?

AM: Oooo, that’s a hard one! I would love for crowds to be bigger! There is some class football and teams across the pyramid (cough, cough Cray are top of those lists) but it’s always a shame that it’s so difficult to tempt people away from the bigger league clubs.

My selfish request would be for compulsory use of golf carts for physios to get on the pitch, that would definitely up my Insta game!

As the title suggests, this is a football writing blog about non-league football. I support Barnet and Tottenham Hotspur, am a writer for o-posts.com and ItsRoundAndItsWhite.co.uk and the occasional piece for Worthing FC and Langney Wanderers FC. View all posts by footballwritingblog