This the second guest blog I’ve asked someone to write just to change things up a little and to hear from other people instead of just me! This one is from Bees fan Lucy Waldon, I was going to post it later this week but as you read you will see why Easter Monday is a memory for her and the reason why it’s gone up today:

I remember going through primary school and pretending to support whatever team was popular at the time, as everyone did, to make friends – and I look back and laugh, because I couldn’t think of anything worse than supporting Tottenham (I think my dad would have actually disowned me if he knew). But it got to secondary school and university and for the best part of a decade, I often got asked that question – why Barnet? It was usually accompanied by laughs, and questions like “who?” or “what league are they in?”

Growing up in Essex, my local teams were probably West Ham or Dagenham & Redbridge, maybe even at a push, the likes of Southend and Colchester United. I was a Brentwood girl and my dad was from East London, more specifically Barking… but all of his family were Arsenal (except my [step] Grandad, who was Fulham). My mum’s from Birmingham, but none of her family were Blues – they were all Villa – but of course, they’re not blessed with ‘good’ teams up that way! I guess when I think about it properly, I should have been Arsenal…

My dad went to Highbury as a boy and continued going for many years after that. I remember vividly him telling me about the time he was unable to get a ticket and to ensure he got his football fix, he went to Barnet instead. I believe his grandad or great-grandad used to play in goal for the Bees, so in hindsight, it was only natural for him to head to Underhill. He was quite quickly hooked and to cut a long story short, I went to my first game in the 1993-94 season. I’m told it was a 3-2 win over Hartlepool – not that I remember much about it. Apparently, I asked, ‘when will it be half time?’ and ‘when can we go home?’ – clearly not an immediate fan! But he persevered and took me again, countless times. Obviously, with the bribe of free food! I used to love visiting Mr Nut and his cart for chocolate raisins at half time, in later years, Opal Fruits from the snack bar under the Main Stand – and better still, our lunchtime tradition of visiting The Green Dragon pre-match during my uni days.

Eventually, I was bought a season ticket and we were Main Stand regulars – Block C, Row H, Seats 3 & 4, at Underhill, of course. The first full season I remember vividly was 2003-04, the year before we went up. I didn’t have a season ticket that year, but went to every match. Dad bought me a season ticket for that championship-winning campaign and all my favourite football memories stem from that year and from Underhill. I had a season ticket for the subsequent years, until we left Underhill for The Hive – I even went to the University of Hertfordshire, so that I could still watch my beloved Bees and not be too far from home (family have always been the most important). 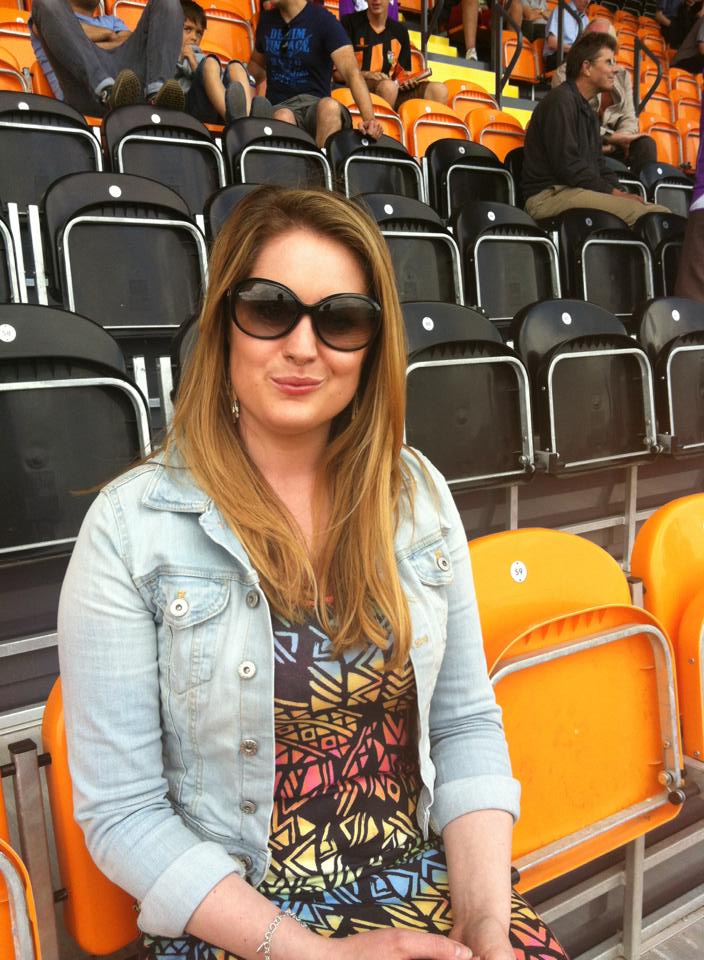 Unfortunately, and sadly, things change. People change. Interests change. My dad was never a fan of The Hive – he thought it was a mission to get to, over-priced and soulless. A lot of the people we used to sit with and became friends with didn’t make the move – and we ended up only going to a handful of games. As his health started deteriorating, football became less of a priority, less important. Our last game together was Easter Monday, 2016. We played Luton and won 2-1 – a John Akinde 96th minute penalty, no less. His colleague/client Andy is a Hatters fan and he was our chauffeur for the day – but we all sat in the home end together. When we won in the final minute, we were worried we wouldn’t get a lift home! My dad sadly passed away that May, and I soon realised that there was more to life than football. I went to a few games with my mum, and a couple on my own, but it wasn’t the same. In fact, my last Barnet game was Leyton Orient away (January 2017) and I actually ended up having a panic attack en route. For me, it was no longer fun and the sole point of going to football had gone.

18 months later and I had my little boy and found myself moving to Milton Keynes. I’ll never give them my money, mind. I still follow the Bees but from afar but not with as avid an interest as I once did. Interestingly, on our estate, there are several other Barnet fans – not least, our old groundsman Wes, who I’ve kept in touch with – and there’s two weeks difference between our little ones! I am adamant I will take Alfie to The Hive one day, so he can get a taste of live football and re-live my childhood – but for the time being, he’s happy watching on TV. I’ve got him chanting “Bees” and I’ve made him wear my scarf.

Plus, all my memorabilia is still at my mum’s – about seven or eight shoeboxes full of programmes and other memorabilia, as well as copies of all my by-lines (including work for Four Four Two and World Soccer Magazine). It will be great to look back at it all one day. This also remains the piece of writing I’m most proud of – and I still can’t read it without getting emotional. So many memories, good and bad, happy and sad, all brought together.

I laugh when I see people bang on about supporting your local team. If I had, things would have been very different……….