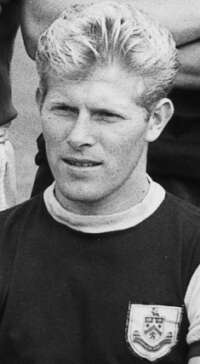 Football has always run through my family on both sides, my dad was heavily involved from refereeing to running youth sides I played in before eventually delving into senior football.

On my mum’s side of the family it goes a lot deeper than this and makes me understand why I have such a love for the game. Some of you older readers will know the famous name that is within my family timeline, if you were watching football in the 1960’s then you’d know who he is, a First Division title winner, a FA Cup runner up and an England international, well known in the North West circles of football, his nickname ‘the Blond Bombshell’ and if you haven’t got there yet he’s one of Burnley FC’s favourite sons.

Yes, Ray Pointer was my great uncle, one with a rich football pedigree and a man I was glad to meet and spend time with, but more on that bit later. The claret and blue of Turf Moor was where he made his name as half of a striking duo alongside Jimmy McIlroy, one that led to Burnley winning the title in 1959-60, the season before Tottenham became the first team to do the league and FA Cup double.

Ray then picked up an FA Cup runners-up medal in 1962 as Spurs defended the cup with another win, coupled with runners-up in the First Division, a real purple patch for Burnley. Months earlier he made his debut for England, scoring on his debut which not many players can claim they have. He went on to play just three times for his country but did net again against Portugal which sent England to the 1962 World Cup Finals, I was lucky enough to see and touch his three caps that were proudly on display in his house.

(Ray middle of the front row)

When it was time to leave Turf Moor, he had amassed 133 goals in 270 games and to this day is still the second highest goal-scorer in Burnley colours. From here the game took him to Bury and a record of 17 goals in just 19 games showed he still knew where the back of net was, just at one level lower, a record that prompted Jimmy Hill to bring him south to Fulham and then onto Portsmouth for six more years and winding up his career close by at Waterlooville. He also held a scoring record at Bury for scoring five goals in one game.

Once he had hung the boots up, it was back to the North East to coach at Blackpool, Burnley and finally at Bury which saw the end of his footballing time and retirement to Blackpool, not far off the seafront which is where I first met him. Barnet were away to the Tangerines in the penultimate game of the 2000-2001 season and extremely close to dropping out of the Football League. I had travelled north with my mum and auntie and we had a double overnight stay with Ray and his wife Marilyn. I managed to persuade him to come to the game, bear in mind he hadn’t been to a live game in I think it over 20 years, that’s how disillusioned a former player had become with it. But, the knowledge, the stories he regaled us with were nothing short of heart-warming and such humbleness in a time where money was beginning to take over the beautiful game, there were quite a few modern day players at that time who he didn’t think were the real deal.

He enjoyed the game the next day, Barnet went down 3-2 unfortunately and the following week out of the Football League for a few years but I was pleased I got to a game with him in tow.

Our second and only other meeting was at my grandad’s funeral some twenty odd years ago and Ray himself passed away in 2016 after years suffering from dementia, a seemingly common disease among players from his time linked to heading heavy footballs.

He was referred to after his death as ‘the David Beckham of his time’ that is very much the highest compliment you could pay and shows his popularity in an era when Spurs had become the first team to win a domestic double, West Ham and Chelsea had stars coming out of all corners and England were World Cup Winners mid-way through the decade.

I went back to Blackpool in 2017 to watch Barnet once again and how much the stadium had changed from their rise to the Premier League and back down again, something I don’t know if Ray would have liked nor the actions of the Oyston family.

But there it is, another footballing story from me and I’m sure there are lots of you out there who have a famous relative in this or another sport drop me a comment if you do……………………….