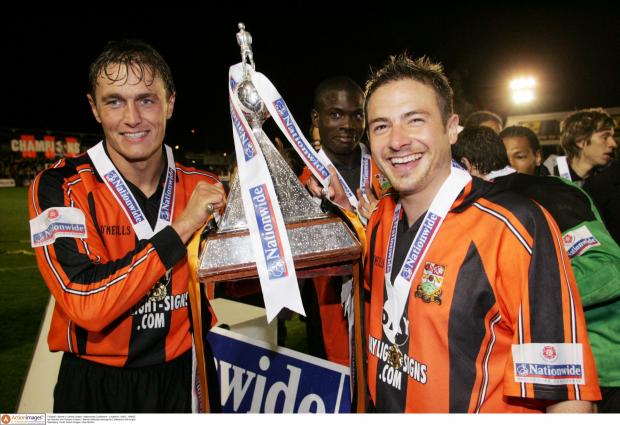 Here we go with part two of the 2004/05 championship winning season ahead of the weekend interview with skipper Ian Hendon:

2005 began with the TV cameras at Underhill with local rivals Stevenage the visitors and after a Grazioli strike had put the Bees ahead only to be pegged back by the visitors just after half time, Ismail Yakabu’s header three minutes from time gave Barnet the three points and saw the first unveiling of the banner ‘Destiny will always take over’. A 1-1 draw at Woking and a 1-0 win over Exeter at Underhill sandwiched two cup games whilst a Roache goal at Burton Albion ended an unbeaten month for the Bees.

The first signs of a wobble appeared in February, three defeats in a row including an 4-1 loss to Carlisle in the FA Trophy, were followed by defeats to Hereford and Accrington Stanley and murmurs of discontent were coming off the pitch despite the Bees still holding a commanding lead over the Cumbrians. The slide was arrested with a 2-1 win at Underhill against Aldershot with goals from Strevens and Grazioli to close out the month.

However another loss followed midweek at struggling York City to begin March, but Fairclough’s men found their form once again and notched five successive victories in a row. A 3-0 win at lowly Leigh RMI was repeated the following Saturday against Crawley before recording the biggest win of the season, 7-1 over Farnborough at Underhill, a young keeper by the name of Jake Cole on the end of a Grazioli hat-trick. Good Friday took the Bees to the West Country and Forest Green backed by a huge travelling support and goals from Hatch and Strevens sent the Bees home with the win. The month ended with an Easter Monday victory over Canvey Island courtesy of Strevens third goal in as many games to leave Fairclough and Barnet just one win away from the title and promotion back to the Football League, all eyes were on Northwich Victoria in seven days’ time.

A trip up the M6 with John Cosgrove took us into a crowd of 1552 mainly consisting of visiting supporters including some who arrived in a limo ready for a promotion party. Unfortunately, the hosts played party poopers and with the Bees unable to get into top gear the Vics ran out 2-0 winners meaning three more points were still required to get over the line, the eyes moved back to Underhill the following Saturday.

To win a title in front of your own fans is something not all teams get the chance to do, but here we were. Almost 4000 packed into Underhill for the day, the title winning day. Halifax Town though, hadn’t read the script and took the lead early on. It looked for a while like Barnet weren’t destined to win the title yet, but Strevens again conjured up the equaliser and from that point there was only going to be one winner in this game!

King’s header put Barnet into the lead before Grazioli put the icing on the championship cake and for the second time Barnet were Conference Champions and back in the Football League with three games to spare.

A 1-1 draw at Morecambe followed where Fairclough opted to rest a few of his starting eleven, in mind the visit of Carlisle Utd coming midweek and the presentation of the championship trophy.

The Cumbrians failed in their quest to win the title and eager to avenge their 3-1 defeat back in October took the lead on the half hour before losing their discipline with two sending’s-off. Unfortunately, they failed to hold onto a lead as well, six minutes into stoppage time that man Grazioli popped up with a stunning overhead kick to start the celebrations with the final whistle moments later, as someone once said ‘Destiny will always take over’……….

The season ended with a guard of honour at Dagenham & Redbridge and defeat with the hosts comfortably winning 2-0, but the prize of a Football League place was won, and Barnet were once again heading into League Two.